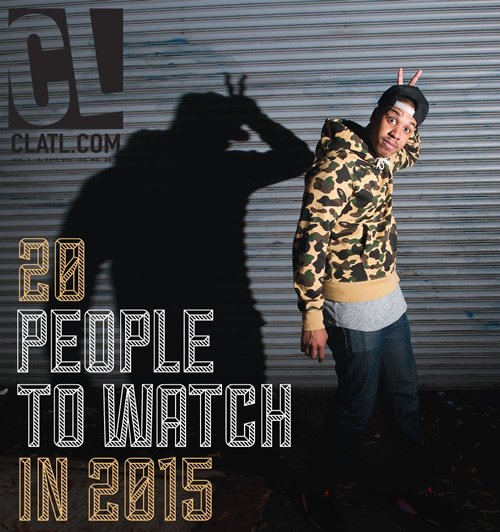 A few years ago, Bem Joiner said a prayer that went something like this. “I had this picture of who I felt I was and who I wanted to be,” he says. “And my prayer was that it would go from inside me to outside.”

Now in order to understand the significance of such a humble request, it helps to know a little bit about the man beneath the Braves fitted whose first name rhymes with fame. Known among cultural circles as a tireless advocate for all things Atlanta, he’s equally critical of its missteps. Joiner loves the city so much, he hates to see it lose. And his passionate rants about the state of the A are nothing short of epic. But he’s been turning those words into action lately, and his mission is finally starting to catch up with his vision.

Joiner’s prayer came shortly after a monthlong cultural exchange in Stockholm in 2012. Organized by Joiner, the exchange featured painter Fahamu Pecou, DJ Lord, and several other Atlanta-based artists of various disciplines collaborating with their Swedish equivalents. Not only could Joiner see how well Atlanta’s hip-hop cachet translated across the world, he also saw how his hometown paled in comparison to a true world-class city.

“The more I learned about Atlanta and saw its influence throughout the world, I saw that Atlanta seemed to be this great city that had all these pieces but just could not seem to line them up,” Joiner says. “So I made it my mission to be the person that lined up the pieces.”

Joiner’s supporters have offered up advice to that end over the years: Dress the part. Play the game. Craft an elevator pitch. But Joiner, who moves like a millennial at 35 and still prefers sneakers to suits, believes he represents a generation that’s done doing business as usual. An urban culturalist and cool hunter with an intuitive sense of what’s next, his résumé includes bringing current household names Drake and Kendrick Lamar to perform in Atlanta before radio had a clue. He intends to combine those early adopter skills with transplants in the innovation and tech sectors to help usher in the next great era of civic progress in this city.

Even among natives, Joiner’s a rare breed. Raised in the West End and educated in Buckhead, his ATL bona fides include meeting icons Joseph E. Lowery, Ralph David Abernathy, Coretta Scott King, and “physically shak[ing] hands with every single one of our mayors going back to Sam Massell,” he says.

He’s used that kind of credibility, and selfless spirit, to become a staple among forward-thinking networks navigating toward Atlanta’s future.

“I appreciate the acceptance,” Joiner says, counting Creative Mornings and the Center for Civic Innovation among the progressive organizations he’s regularly attending or lending his voice to. “I am probably like the token black Atlantan that’s of the hip-hop culture,” he says. “But in an age of transparency and authenticity, I think people are like, ‘If we’ve got somebody that’s from Atlanta and knows the lay of the land and can kind of co-sign us or suggest what we should or shouldn’t do, we’ll gladly welcome that voice.’ And most people have been insanely welcoming.”

Joiner also knows there’s strength in numbers. He’s usually the person at a social function that not only knows everybody, but also knows who to introduce to whom based on each individual’s professional interests. That intuitive ability to bring an eclectic crowd to the table for a conversation helped Leverage, the short-lived networking incubator and monthly party he started with local capital investor Ted Griffith, excel in 2013. When it outgrew Griffith’s Edgewood loft, they had to put the party on ice.

Now Joiner’s looking for a few talented women and men to create what he calls an “innovative ecosystem,” pooling the best and brightest from different disciplines to solve problems in Atlanta. He’s hashtagged the quest #NewLeaders and it’s part of a proposed initiative he’s helping to shape as a member of the newly formed Center for Civic Innovation. Led by executive director and founder Rohit Malhotra, CCI intends to help transform Atlanta through social entrepreneurship. Joiner’s role is to help bridge the gaps between the city’s creative and civic circles.

For Joiner, it’s a natural fit.

“Finally, I’ve come across an institution that allows me to be me,” says Joiner, who’s shaping Atlanta’s future for his daughter’s sake. Now that he’s starting to fulfill his purpose, those classic Bem rants are already coming fewer and farther between. “A lot of that was coming from a lack of ways to get out my ideas and my thoughts. When you start growing into who you are and becoming at peace with that, then it’s not as rowdy.”